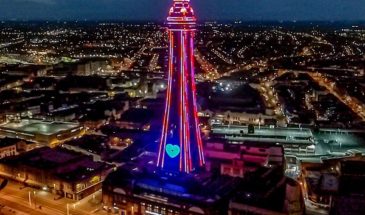 Please login to add your wishlists.
From £25.00
0 out of 5
Trip Enquiry
Trip code BLACKPOOL

Blackpool is a large town and seaside resort in Lancashire, England. Located on the northwest coast of England, it is the main settlement within the borough also called Blackpool. The town is by the Irish Sea, between the Ribble and Wyre rivers, and is 27 miles (43 km) north of Liverpool and 40 miles (64 km) northwest of Manchester. At the 2011 census, the unitary authority of Blackpool had an estimated population of 139,720, while the wider built-up area (which also includes areas outside the unitary authority) had a population of 239,409. This makes it the second-largest in Lancashire, as well as the fifth-most populous urban area in northwest England after Manchester, Liverpool, Preston, and Birkenhead

Local departure by coach or Home Connect service, then on to the Hotel, Blackpool for three nights.

Day 2:Day at leisure or Fleetwood

Relax in Blackpool and enjoy the fantastic beach, many attractions and traditional seaside amusements. Or, join our optional excursion to Fleetwood, a traditional fishing port renowned for its market.

Enjoy a trip to Southport, where we will have free time to explore this popular seaside resort. From the pier and coastline, to the bustling shops on Lord Street, there is an air of Victorian elegance.

This evening enjoy an included evening trip through the Illuminations to see the world-famous lights.

Be the first to review “Blackpool Weekend – 4 Day” Cancel reply