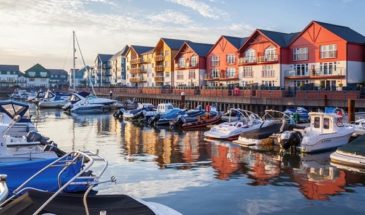 Please login to add your wishlists.
From £25.00
0 out of 5
Trip Enquiry
Trip code EXMOUTH

Exmouth is a port town, civil parish and seaside resort, sited on the east bank of the mouth of the River Exe and 11 miles (18 km) southeast of Exeter.

Plymouth is a port city and unitary authority in South West England. It is located on the south coast of Devon, approximately 36 miles (58 km) south-west of Exeter and 193 miles (311 km) south-west of London. It is bordered by Cornwall to the west and south-west.

Exeter is a city in Devon, South West England. It is situated on the River Exe, approximately 36 mi (58 km) northeast of Plymouth and 65 mi (105 km) southwest of Bristol.

In Roman Britain, Exeter was established as the base of Legio II Augusta under the personal command of Vespasian. Exeter became a religious centre in the Middle Ages. Exeter Cathedral, founded in the mid 11th century, became Anglican in the 16th-century English Reformation. Exeter became an affluent centre for the wool trade, although by the First World War the city was in decline. After the Second World War, much of the city centre was rebuilt and is now a centre for business and tourism in Devon and Cornwall.

Local departure by coach or Home Connect service, then on to the Hotel, Exmouth for four nights.

Trip to the historic city of Exeter, whose skyline is dominated by the unique Norman twin towers of the majestic cathedral. There is so much to discover along the bustling quayside.

Day 3:Day at leisure or Sidmouth and Seaton

Relax in Exmouth, or join our optional excursion to Sidmouth and Seaton, pretty seaside towns with lots of character.

Today we journey to Plymouth where the Barbican and Plymouth Hoe are all worth exploring.