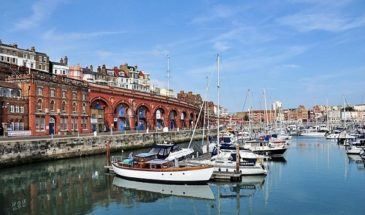 Please login to add your wishlists.
From £15.00
0 out of 5
Trip Enquiry
Trip code RAMS

Ramsgate is a seaside town in the district of Thanet in east Kent, England. It was one of the great English seaside towns of the 19th century. In 2001 it had a population of about 40,000. Ramsgate's main attraction is its coastline, and its main industries are tourism and fishing.

Margate is a seaside town on the south coast of the Thames estuary in Kent in England. The town has been a significant maritime port since the Middle Ages, and was associated with Dover as part of the Cinque Ports in the 15th century. It became a popular place for holidaymakers in the 18th century, owing to easy access via the Thames, and later with the arrival of the railways; popular landmarks include the sandy beaches and the Dreamland amusement park. During the late 20th century, the town went into decline along with other British seaside resorts, but attempts are being made to revitalise the economy.

Be the first to review “Ramsgate & Margate” Cancel reply