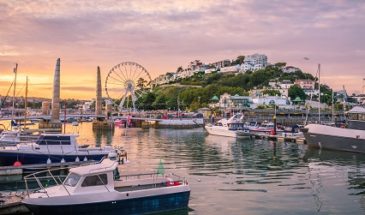 Please login to add your wishlists.
From £25.00
0 out of 5
Trip Enquiry
Trip code TORQUAY

Torquay is a seaside town in Devon, England, part of the unitary authority area of Torbay. It lies 18 miles (29 km) south of the county town of Exeter and 28 miles (45 km) east-north-east of Plymouth, on the north of Tor Bay, adjoining the neighbouring town of Paignton on the west of the bay and across from the fishing port of Brixham.

The town's economy, like Brixham's, was initially based upon fishing and agriculture, but in the early 19th century it began to develop into a fashionable seaside resort. Later, as the town's fame spread, it was popular with Victorian society. Renowned for its mild climate, the town earned the nickname the English Riviera.

The writer Agatha Christie was born in the town and lived at Ashfield in Torquay during her early years. There is an "Agatha Christie Mile", a tour with plaques dedicated to her life and work.

The poet Elizabeth Barrett Browning lived in the town from 1837 to 1841 on the recommendation of her doctor in an attempt to cure her of a disease which is thought likely to have been tuberculosis. Her former home now forms part of the Regina Hotel in Vaughan Parade.

Local departure by coach or Home Connect service, then on to the Hotel, Torquay for three nights.

Day 3: Day at leisure or Teignmouth

Relax in Torquay, or join our optional excursion to Teignmouth, a pretty coastal town with a classic Victorian pier and traditional fishing port.

Be the first to review “Torquay Weekend – 4 Day” Cancel reply